You are here: home » biography » awards 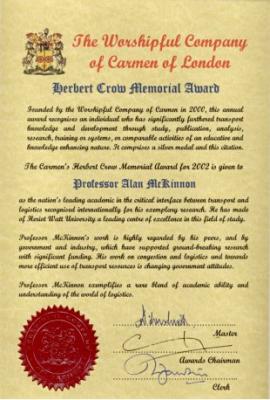 In March 2003, Professor McKinnon received the Herbert Crow Memorial Award from the Worshipful Company of Carmen, the City of London livery company responsible for transport. The award is made to an ‘individual who has significantly furthered transport knowledge and development through study, publication, analysis, research, training or systems.’  He was presented with a silver medal and citation by the Lord Mayor of London at the annual banquet of the Company in the Mansion House on the 11th March 2003. 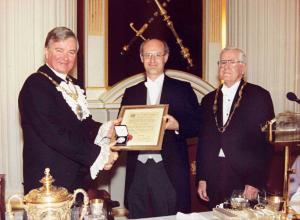 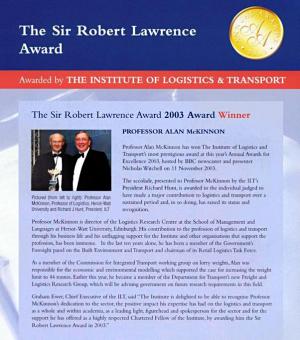 In November 2003, Professor McKinnon received the top award of the Chartered Institute of Logistics and Transport in recognition of his ‘dedication to the sector, the positive impact his expertise has had on logistics and transport as a whole and within academic, as a leading light, figurehead and spokesperson for the sector and for the support he has offered as a highly-respected Chartered Fellow of the Institute’.

Fellowship of the European Logistics Association

In May 2015 Professor McKinnon was made a fellow of the European Logistics Association, only the fifth person to receive this honour since the Association was founded in 1984. ELA is a ‘federation of 30 national organisations, covering almost every country in Central and Western Europe’.  The award of the fellowship was in recognition ‘his contribution in developing the body of logistics knowledge’.